Tihar : A festival of light

Tihar also known as Deepawali is a Hindufestival. It is celebrated for 5 days. It is celebrated mainly in Nepal and the India. It is the festival of lights. In this festival diyas are lit inside and outside the houses to make it bright at night. It is known as swanti among the Newars and as Diwali among Madhesis. Set in the Vikram Samvat calendar, the festival begins with Kaag Tihar in Trayodashi of Kartik Krishna Paksha. It ends with Bhai Tika in Dwitiya of Kartik Sukla Paksha every year.

Tihar is the second biggest festival in Nepal after Dashain. In this festival animals like crows, dogs, cows, and oxen are also worshipped. People make Rangolis on the floor of living rooms or courtyards. They use materials such as colored rice, dry flour, colored sand or flower petals to make these Rangolis. Rangolis are made for welcoming Gods and Goddesses of Hinduism mainly Goddess Lakshmi. 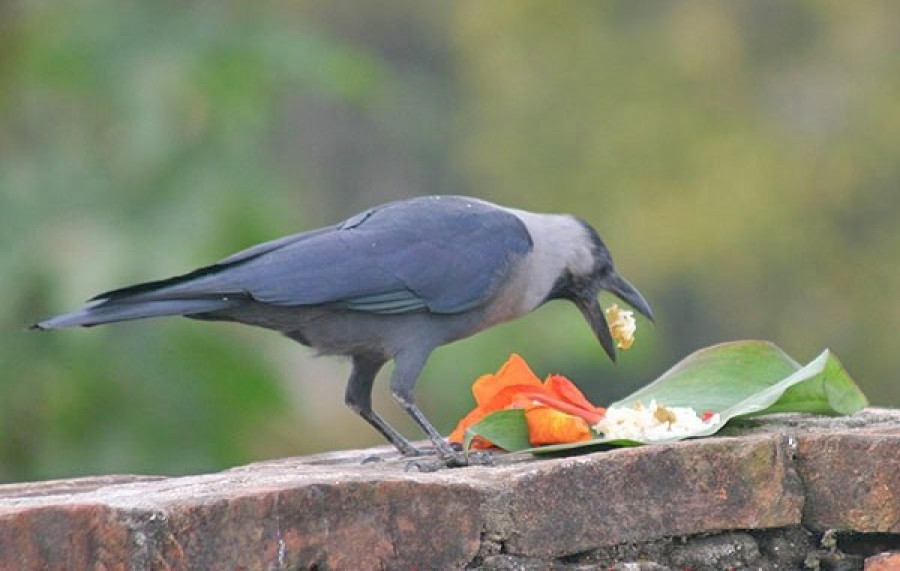 A crow eating the food

Kaag Tihar (Crow Festival) is the first day of Tihar. In this day the crow is worshipped. Hindus regard crows as the messengers of Yamraja, the god of death. People worship it to bring good luck in their houses.They also give food to kaag or crows on that day.

The second day is called Kukur Tihar (Dog Festival). In this day, people offer garlands, tika and delicious food to dogs. Dogs are important animals in Hindu mythology. It is believed that Bhairava, an incarnation of Lord Shiva, had a dog as a vahana (vehicle). It is also believed that Yama, the god of death, had two guard dogs – each with four eyes. The dogs are said to watch over the gates of Naraka, the Hindu concept of Hell. Due to this belief, this day is also known as naraka chaturdasi.

The morning of the third day is Gai Tihar (worship of the cow). In Hinduism, cow is the symbol of Prosperity and wealth. In ancient times cows were very useful. Their milk, dung, even urine was used for purpose like Purification. So, on this day people worship cow by garlanding and feeding them with the best grass. They clean and decorate the houses. Doorways and windows are decorated by garlands made of Saya Patri (Marigolds) and makhamali (Gomphrena globosa) flowers.

In the evening Laxmi, the goddess of wealth is worshipped. She is worshipped by lighting oil lamps (Diyo) or candles on doorways and windows. It is believed that in this day she visits her followers and gives them blessings. At night the girls enjoy playing Bhailo by singing and dancing. They visit many houses with musical instruments. They collect money as a tip from houses and share the money amongst themselves.

From the third day onward Tihar is celebrated with Deusi and Bhailo with light and fireworks. Boys sing Deusi and the girls sing Bhailo. In return, the home owners give them money, fruit and selroti (a Nepali roundel made of rice flour and sugar). Social workers, politician, and young people also visit local homes. They sing these songs and collect money for social activities.

Laxmi Prasad Devkota, who is regarded as the greatest poet of Nepali language, was born on this day. He was named after the Laxmi Puja.

There are 3 different kinds of pujas on the fourth day. Mainly ox is worshipped in this day by giving different foods. It is observed as Goru Tihar or Goru Puja (worship of the oxen). People who follow Vaishanism perform Govardhan Puja. Govardhan Puja is worship towards Govardhan mountain. Cow dung is taken as representative of the mountain and is worshiped. Another type of puja is Mha Puja (worship of self). It is done by the people of Newar community during the night. This day is seen as the beginning of the new Nepal Sambat calendar year.

The fifth and last day of Tihar is called Bhai Tika. On this day sisters apply “tilaka” or “tika” on the foreheads of their brothers. This is done to ensure the long life of their bothers and thank them for the protection they provide.  It is believed that, Yamaraj, the God of Death, visited his sister house. He stayed there for five days so Tihar is also called Yamapanchak. He was pleased with the Hospitality. so he asked her to make a wish. Yamuna wished that the love and faith of the brothers and sisters who meet every year on the same day remain strong and the brothers have a long life and fame. Yamaraj granted the wish.

In Bhai Tika, brothers sit on the floor while their sisters perform their Puja. During the puja sisters circle brothers by dropping oil on the floor from a copper pitcher. They also apply oil to their brother’s hair. After that, they apply seven-color tika on the brother’s forehead. Similarly, brothers also give tikas to their sisters. They also exchange gifts. This ritual is practiced for both younger and elder brothers. Those without a sister or brother join relatives or friends for tika.This festival makes the relationship between brothers and sisters stronger.

Along with the seven-coloured tika, sisters provide brothers with sagun, sweets, Makhamali garland. They also provide a sacred cotton thread of Tantric importance. The thread is similar to Janai and is meant to protect their bodies.

Chhath Puja: A famous festival in the Terai Region