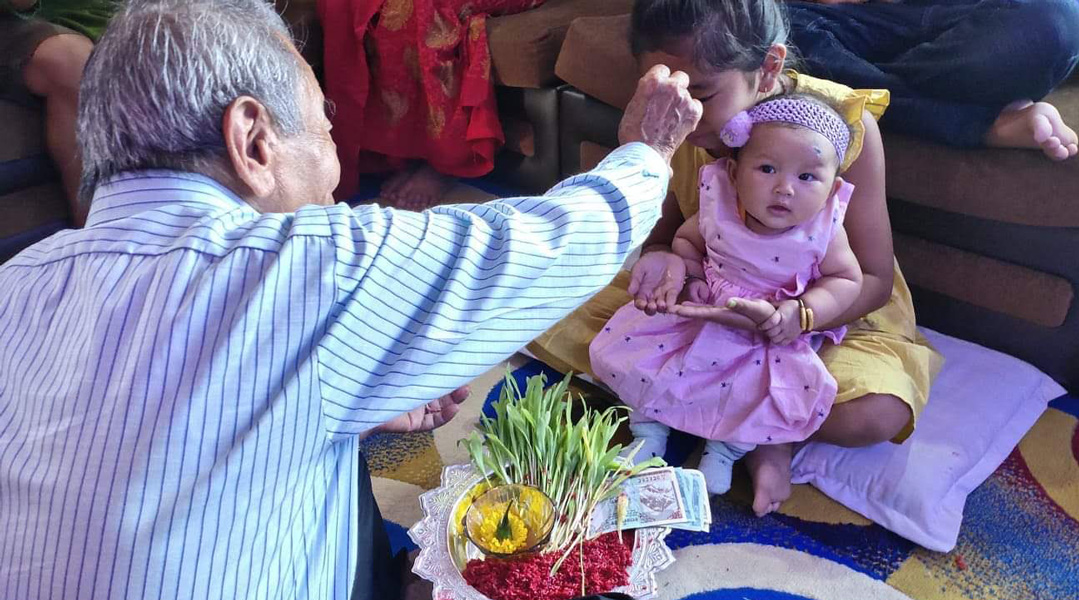 Dashain is the longest and most auspicious festival of Nepal which falls in Sept-Oct month of the year. It is the biggest festival of the people in Nepal and all the Hindus of the world. This festival symbolizes the victory of good over evil. According to Hindu Mythology, the demon Mahisasur has created terror in Devaloka. But, fierce goddess Durga had come to rescue by defeating Mahisasur after a continuous battle of 10 days.
Many Nepalese people from the world gather with their families to celebrate Dashain. From the tenth day of Dashain, the family members receive Tika (rice, red vermillion, and yogurt) and blessing from the elders. Huge swings are set up for the children. Families offer male goats, chickens, eggs, and coconuts to the goddess Durga.

Tihar, a 5-day-long festival is the second most important festival in Nepal after Dashain. It is the festival especially dedicated to strengthening the relationship between brothers and sisters. Also, this festival cherishes their divine relationship of people with animals.

Shivaratri is the night of Lord Shiva. On this special day, devotees bathe early in the morning and go to Shiva temples to worship Lord Shiva. The best place to observe this festival is at Pashupatinath Temple where thousands of Sidhus celebrates by remembering Shiva, chanting prayers & smoking weeds, and hashish considering dear to Lord Shiva.

Chhath is the main festival in the Terai region of Nepal that falls seven days after Tihar. Devotees worship the rising and setting sun thanking them for bestowing the bounties of life on earth. Devotees celebrate this festival by prostrating holy march to river ban, fasting, avoiding drinking water, standing long periods on the water taking a holy bath.

Holi is also known as the Festival of Colors. It is celebrated in the Terai region of Nepal one day and the next day in the rest of the region. On this day, people smear colors and throw water balloons at their families and friends. Holi mainly celebrates the arrival of spring, blossoms of love, play, and laugh & forget and forgive.

Lhosar is a festival mostly celebrated by the ethnic groups of Nepal Sherpas, Tamang & Gurung people who trace their origin from Tibet. It is basically the first day of the New Year. The different ethnic groups celebrate Lhoshar on different dates and with different styles. As part of the festival, peoples see themselves in a traditional dress for days, raise holy flags atop their homes. Monks of different monasteries hold prayer meetings. People exchange greetings and have delicious traditional foods. Also, people organize cultural programs where anyone can go, sing, dance, and enjoy the program respecting their culture and tradition.

Gai Jatra is a festival mainly celebrated by the Newar community of Kathmandu Valley. On this day, families who have lost their loved ones during the year decorate cows and go on the procession. They believe that will help the departed souls to cross the cosmic ocean in their journey to the after-world. Peoples decorate their kids in cow customs and walk on the procession route. Many shows are organized where comedians insult politicians.